We arrived home in the early hours of yesterday morning and I'm now in my usual post USA condition of severe jetlag and functioning at about half my normal capacity...which puts me about on a par with your average cabbage or similar vegetable! Our luggage decided it wasn't ready to return with us and spent an extra night in Chicago - who can blame it, it's an amazing city! It's only just returned home after taking a later flight. I'm supposed to be unpacking but just had to have a quick peak at my photos.... 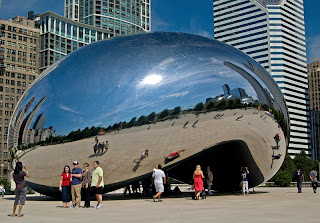 These are three views of a sculpture in Millenium Park, Chicago, I called it The Bean and as you can see I was fascinated by it. These were taken on our second day, it was wonderfully hot and sunny. We spent the afternoon at Wrigley Field watching the Cubbies play Arizona Diamondbacks. Not the most exciting game but good to see that historic ballpark. 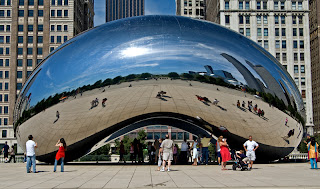 It's hard to believe the holiday is over. I'm missing my Californian friends so much. On this trip I was also lucky enough to meet Mafia Wife and her lovely family who drove to Chicago to see us. We had a ball and she has two of the custest, funniest, most adorable little boys you could imagine.

I really MUST get some more washing on...back to the unpacking!
Posted by CG at 2:07 pm

Email ThisBlogThis!Share to TwitterShare to FacebookShare to Pinterest
Labels: Chicago, The Bean, unpacking

That was the coolest sculpture! We had so much fun hanging out with you all that day! Can't wait for a time when we can do that again! Glad you're home safely and get some rest and readjust to your time zone ;)

Glad you're home safely...though you must be shattered! I love this sculpture...it's huge! How on earth do they keep it so shiny? Make sure you have a good rest :o)
{{hugs}}
Rx

So glad you are back safe and sound. Chicago is about 8 hours from me, wish it had been a bit closer, I could have visited too if it was!!! :-(((

Beautiful photos of this famous sculpture. Cant wait to see more from your trip. Take care and happy birthday which I believed happened while you were away.

Hey!!!!!
You're back again! Yeh how was California, I wonder what you did all in Chigaco....and yes I can Imagine you're missing the boys and others......

Anyway, Welcome home, yes on everything comes and end even the holidays, we went back earliers also because of our dogs hurted leg.

I missed you and your blogging, :) JoAnn

So glad you are back! :) CANT WAIT TO SEE ALL YOUR PICS!

welcome back.....those photos are so clear! Yesterday,my friend Andrea only showed me her photos of the same landmark from a week ago! I hate packing and unpacking...good luck!

So glad you're home safely - I missed you! {{HUGS}} Can't wait to see more of your photos; am thrilled that you had a wonderful time.

That 'bean' is amazing.